Appia Energy is finding the types of REEs that are in demand, and in quantities that can be profitably produced, at its […]
By Magda Gardner October 22, 2020 At 12:20 pm 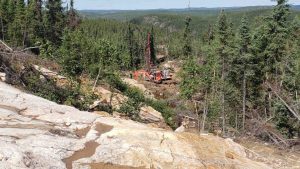 Drilling at Appia's Alces Lake high-grade rare earth project in northern Saskatchewan Credit: Appia Energy[/caption] Appia Energy is finding the types of REEs that are in demand, and in quantities that can be profitably produced, at its Alces Lake property in northern Saskatchewan. After the September announcement by the Government of Saskatchewan that it would build a $31 million domestic rare earths processing facility, Appia Energy (CNSX: API; US-OTC: APAAF) released the results of assays taken from its wholly owned Alces Lake REEs project in Saskatchewan. The 143 sq. km property is situated 30 km east of Uranium City in the Athabasca Basin of northwestern Saskatchewan. Appia president and chief executive Tom Drivas emphasized the quality of the deposit at Alces Lake. “It’s high-grade, critical rare earths, and by high-grade, I mean surface zones and near-surface zones that are up to 80-85% monazite,” says Drivas. “A very high percentage of our rare earths, like 99%, are contained in that one mineral, monazite. So, this project is one of a kind. It’s definitely the highest grade in North America, and one of the highest-grade projects in the world.” Since Appia started exploring Alces Lake in 2017, it has discovered 74 REEs and uranium-bearing surface zones and occurrences on the property. The first phase of this year’s exploration program saw the company complete surface channel and diamond drilling work within six zones on the property, collecting 24 samples in the process. Though this exploration work encompassed less than 15% of the entire property, the assay results of total rare earth oxides (TREO) from all of the six zones sampled showed an average composite grade of 16.65 weight percentage (wt%) TREO. One of them, the Ivan zone, hosts the highest grades seen on the Alces Lake property, with surface mineralization intercepts of up to 53.01 wt% TREO over 2 metres. Diamond drill hole IV-19-012 intersected 16.06 wt% TREO over 16 metres, including 49.17 wt% TREO over 4 metres. Drivas pointed out the need for domestic sources of high-grade REE projects like Alces Lake given China’s dominance of the industry. “China controls 70% to 80% of the market, and that’s caused the United States, Canada, Australia and other countries to look for other sources. And here, we’ve got the grade and we’ve got the mineralogy. But the other thing that is crucial is you’ve got to have the right rare earths.” According to Drivas, Alces Lake has the right types of REEs that are in demand, and in quantities that can be profitably produced. He says that about 25% of the TREO deposit at the property includes neodymium, praseodymium, dysprosium and terbium, which are required in the making of rare earth magnets that are in demand for electric vehicles, wind turbines and military and aerospace applications. For Drivas, the final part of making Alces Lake an important part of the North American REE sector is the decision to create a processing facility in Saskatchewan. “You know, the mining [of REEs] is not very difficult,” he says. “But until now all the final processing had to occur in China. So now that we have a plant in our backyard, so to speak, that changes everything.” The REE processing plant is slated to be built in Saskatoon, with construction beginning this fall and processing scheduled to begin in late 2022. This has given Appia the impetus to continue to push forward with the project. “We want to hit this really hard,” Drivas says. “We want to develop a first resource, and then move to the next phases, with a preliminary environmental assessment, and so forth. But we really want to get it to the next level, and ASAP.” The preceding Joint-Venture Article is PROMOTED CONTENT sponsored by Appia Energy, and produced in cooperation with The Northern Miner. Visit www.AppiaEnergy.ca for more information.