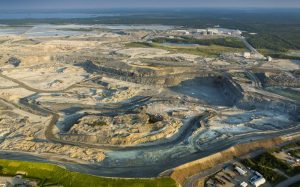 Canadian Malartic open pit Credit: Osisko[/caption] QUEBEC – Osisko Gold Royalties has entered into a definitive agreement with Quebec’s Caisse de depot et placement to acquire an outstanding 15% interest in a portfolio of Canadian precious metals royalties for $12.5 million, funded by cash on hand. This 15% interest is the remaining portion of a portfolio originally purchased from Teck Resources in 2015. The purchase includes 28 royalties on properties in Canada and includes increased interests on revenues derived from Alamos Gold’s Island Gold mine and Eldorado Gold’s Lamaque mine. Both of these assets have planned expansions and the two operations contributed an estimated 3,000 gold-equivalent oz. to Osisko last year. “This transaction increases Osisko’s ownership in a quality royalty portfolio of Canadian assets and adds immediate cash flow on premium assets, such as the Island Gold and Lamaque mines,” Sean Roosen, the company’s chairman and CEO, said in a release. With this transaction, Osisko’s royalty interests on the Island Gold mine have increased to between 1.38% and 3%, from 1.17% to 2.55% previously. In addition, the company’s interest in revenues from the Lamaque mine is now at 1%, up from 0.85% previously. On the pre-production side, Osisko now has a 0.5% NSR (net smelter royalty) on O3 Mining’s Marban property, up from 0.425% with an associated commercial production payment increased to $5 million, from $4.25 million. Additional royalties on exploration and development properties have increased by approximately 18%. The Caisse has an equity stake in Osisko Royalties. Osisko Gold Royalties is a royalty company focused on precious metals in the Americas and holds 135 royalties, streams and precious metal offtakes. Its cornerstone asset is a 5% NSR on the Canadian Malartic mine. The company also holds the Cariboo gold project in B.C. and holds stakes in resource companies, including a 14.7% interest in Osisko Mining, an 18.6% stake in Osisko Metals and a 19% ownership of Minera Alamos. For more information, visit www.OsiskoGR.com.