TORONTO – Mountain Province Diamonds‘ biggest shareholder is once again providing a lifeline to the diamond miner, which has been starved of […]
By Alisha Hiyate August 19, 2020 At 12:19 pm Mining at the Hearne pit at the Gahcho Kue diamond mine in the Northwest Territories. Credit: Mountain Province Diamonds 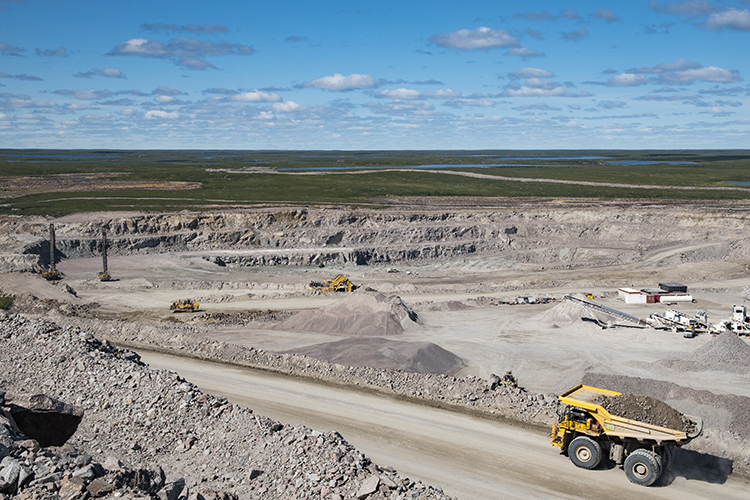 Mining at the Hearne pit at the Gahcho Kue diamond mine in the Northwest Territories. Credit: Mountain Province Diamonds[/caption] TORONTO – Mountain Province Diamonds' biggest shareholder is once again providing a lifeline to the diamond miner, which has been starved of revenue since the coronavirus pandemic began in March. After closing a $50-million alternative diamond sale deal in June with Dunebridge Worldwide, which is controlled by Irish billionaire Dermot Desmond, Mountain Province Diamonds is proposing to double the value of the sales agreement to $100 million. In addition, the company will be seeking shareholder approval to transfer its current US$25 million in debt from the existing lenders to Desmond, who owns 32% of its shares, or a related company. Mountain Province owns 49% of the Gahcho Kué mine in the Northwest Territories, operated by its 51% partner De Beers. However, the ongoing coronavirus pandemic has upended diamond sales globally and placed the company in “serious financial difficulty,” according to an independent committee of directors that reviewed the transactions and alternatives. The initial $50-million sales agreement with Dunebridge Worldwide provided Mountain Province's only revenue stream in the second quarter. The company sold 757,000 carats for $34 million during the quarter, compared with 1.1 million carats bringing in $95.8 million in the same period of 2019. The recent sales, at an average realized price of US$33 per carat, did not include a normal production mix, with higher-value and larger stones excluded. Under the agreement, Dunebridge buys the diamonds at current market prices, with Mountain Province participating in 50% of the future upside. The deal only includes run-of-mine diamonds under 10.8 carats. In addition to doubling the sales agreement with Dunebridge to $100 million, Mountain Province is also seeking approval to reassign, from existing lenders, the company's senior secured revolving credit facility, to Desmond. The interest rate would be adjusted to 5% per year, payable monthly, and certain financial maintenance covenants would be removed for a one year period. "The impact of the COVID-19 pandemic on the diamond industry and in turn the company has been profound,” said president and CEO Stuart Brown, in a release. “The support shown by Mr. Desmond and the subsequent finalization of the transactions will be a substantial positive step in stabilizing the company and brings more certainty to its future. In particular, the US$50,000,000 increase of the sales agreement allows the company the flexibility to sell its diamonds under the agreement or through the traditional sales channels as they begin to open after the summer holidays." Mountain Province expects to hold its first sale since the start of the pandemic in September. For the most recent quarter, the company reported a quarter-end cash position of $16.8 million and a working capital deficit of $330.8 million. The shareholders meeting is set for Sept. 29. For more information, visit mountainprovince.com.