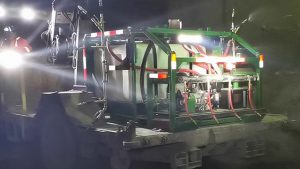 MineKleen Underground Mine Dust Control System Credit: Midwest Industrial Supply[/caption] Midwest Industrial Supply, the leader in dust control and soil stabilization innovation, recently released a new system for dust control in hard-rock underground mines. The MineKleen® Underground Mine Dust Control System can eradicate up to 95 percent of dust while reducing water usage by up to 95 percent. The MineKleen System – designed by miners – is the result of years of research in some of the harshest underground mine conditions. The Midwest team brings decades of cutting-edge molecular technology to this new system. Midwest developed the MineKleen Plus proprietary chemical formulation consisting of a synthetic fluid plus polymeric binder system. This system binds fines together, creating a pavement-like strength that gets stronger with use. Midwest’s proprietary formulation is environmentally safe, verified by several Canadian authorities and the U.S. EPA. “The MineKleen System keeps particulate matter out of the air, enhancing regulatory compliance and the health and safety of mine workers,” said Jim Silva, Midwest’s vice president of mining solutions. “It helps roads hold up longer, even in heavily used areas.” The system also includes the MineKleen Sprayer, a unique distribution system designed specifically for underground mines. It enables the formulation to be applied to roads, backs and ribs at the same time, enhancing productivity. One mine, which tested Midwest’s formula against a generic dust control product used previously, cut costs by 35 percent, saving nearly US$225,000 annually. The mine also extended days between applications to 14 days from every three days, decreasing annual applications from 122 to 28. Manhours required for dust control and road stabilization dropped from 487 to 133, while the surface of the mine roads dramatically improved. Reduced maintenance and less watering boosted worker productivity in moving product out of the mine. Mines seek an affordable way of managing dust. For many, watering is the go-to solution. But this compounds the challenges. Regular watering degrades the road by washing away fines (small particles that hold the road together, keeping larger material in place). So, road maintenance and rebuilding costs escalate. Mining engineers seeking underground dust control solutions should contact Dan Carpenter at 888-762-3695 or visit MineKleen.com. The content above is a sponsored post from Midwest Industrial Supply.