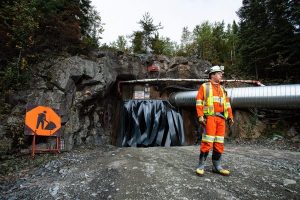 Pure Gold ramp entrance Credit: Pure Gold[/caption] RED LAKE - With a forest fire burning south of Red Lake now under control and the town's evacuation order lifted, Pure Gold Mining announced that it has restarted development work at its PureGold Red Lake mine. Power has been restored to the site and the company has completed surface and underground inspections and confirmed no damage to infrastructure or equipment. PureGold does not expect the short-lived shutdown to affect its mine construction schedule, which includes a first gold pour from the PureGold Red Lake mine in the fourth quarter. “The immediate response and tireless efforts of the Ministry of Natural Resources and Forestry contained the fire, protecting the people, homes, businesses and vital infrastructure of the community," Darin Labrenz, the company's president and CEO, said in a release.

Last week, the CBC reported that approximately 4,000 people were evacuated from Red Lake as a fire burned 2 km away from the town. By Sunday morning, residents started to return after 50 mm of rain fell on parts of the area Friday night.