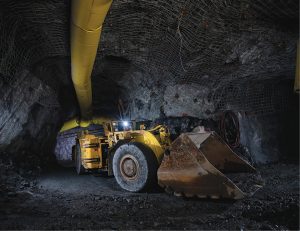 Pure Gold Mining is set to pour first gold at its PureGold Red Lake mine before the end of the year, and the timing couldn’t be better.

The past-producing mine – formerly known as the Madsen mine – will be coming online at a time when the gold price is rallying, few other projects are actually being built, and in a jurisdiction that’s been pretty much untouched by the global COVID-19 pandemic – Red Lake, Ont.

While much of the heavy lifting is behind it, Pure Gold had to do it while markets were less favourable to gold. The junior made the decision to move the project to production two years ago, even though management knew the potential to expand the project through exploration was enormous.

“There wasn’t a lot of love for the industry at the time,” says president and CEO Darin Lebrenz. “And you can only go back to the market so many times before you dilute yourself out of any kind of value. We saw a non-dilutive path to generate cash flow to self-fund our growth.”

In a different market, the company would have had the option to continue exploration and then “right-size” the mine based on the results, Labrenz notes.

“Today, we’re starting to see exploration stories get attention and see real value increase through exploration. We delivered over the past four years, arguably some of the best drill results and discoveries in Canada and really haven’t seen a lot of appreciation over that period because of the market we were in.”

This year, however, the company’s stock price has taken off – starting the year at around 80¢ per share and more than doubling that to over $2 per share at presstime.

The PureGold mine is expected to produce an average of 80,000 oz. gold annually over a mine life of 12 years at all-in sustaining costs of US$787 per oz. A feasibility study released in early 2019, and using a gold price of US$1,275 per oz., projected an after-tax net present value (NPV) of $247 million and an internal rate of return (IRR) of 36%, with after-tax cumulative cash flows pegged at $383 million.

As it is, with a diluted head grade of 9 g/t gold, the mine will be the fifth highest grade in Canada, and 17th in the world, Labrenz notes.

But Pure Gold sees the current development as just the first phase of a larger project.

And now that the market is friendlier to gold miners and explorers, the company’s in the unique position of being able to focus on starting up the mine, while at the same time conducting an aggressive exploration program in preparation for the next phase of growth.

In June, the company launched a 30,000-metre drill program at the project, aimed at upgrading resources to reserves, expanding surface discoveries on the 47-sq.-km property, and finding more high-grade zones similar to the 8-Zone – which boasts resource grades of 20.5 g/t gold.

“Most companies don’t have the financial capacity to continue to look at the growth aspect of their project when they’re in the midst of building out a mine,” Labrenz says, noting that Eric Sprott is a 12% shareholder.

The exploration program will build on 20,000 metres drilled at the project last year, as well as a preliminary economic assessment (PEA) released in early 2019 that looked at adding production from three near-surface satellite deposits: Wedge, Russet South and Fork. That study showed potential to add 3.7 years of mine life and total production of 210,000 oz. of gold.

The opportunity to expand the 8-Zone (which has an indicated resource of 458,000 tonnes grading 20.5 g/t gold for 301,000 oz.) and find similar high-grade zones is especially exciting.

“The 8-Zone is in the same geologic environment as the Red Lake mine High-Grade Zone, which obviously was the springboard to Goldcorp’s success,” Labrenz says.“It sits in a mafic-ultramafic contact, similar to the High-Grade Zone and that context stretches for 10 km along our property.”

The 8-Zone is open down-plunge as well as towards surface, and Pure Gold has established geologic continuity between it and the Russett South discovery, which outcrops at surface. The second hole testing the gap between the 8-Zone and its updip continuation at Russett South cut 51 metres of 1 g/t gold, including 0.9 metre of 9.9 g/t gold in December.

As the Madsen mine, PureGold Red Lake produced 2.5 million oz. gold between 1938 and 1976. Claude Resources restarted the mine briefly in the late 1990s.

Systematic exploration and a solid understanding of the geology developed by Pure Gold over the past four years will likely ensure that this time, the mine stays in production much longer.

As a brownfields site with an existing mill, tailings facility and other infrastructure, a modest US$90-million financing closed last August, was enough to cover the estimated $95-million project capex.

Pure Gold has completed a new water treatment facility at the site, and is working on a mill refurbishment and expansion to 800 t/d from 550 t/d. That expansion will include a new ball mill and gravity circuit that will allow the company to cheaply recover free gold in the ore and reduce the use of reagents in recovery.

In addition, in the second year of production, the company plans to install a new hoist for the existing 1,275-metre shaft that will support a transition to an all-electric underground fleet that will reduce ventilation costs as the company mines deeper.

With Red Lake having experienced only a handful of COVID-19 cases, and most of Pure Gold’s contractor workforce being local, the company and construction project lead JDS Energy and Mining have not experienced any construction delays due to the virus.

Underground productivity has in fact been much better than expected. As of June 19, the company had completed 1,285 metres of underground development, with an advance rate of 8 metres a day – 60% higher than the 5 metres a day anticipated.

Labrenz puts the rapid pace down to a combination of experienced workers, good ground conditions and modern technology, and says it bodes well for potentially bringing the 8-Zone forward in the mine plan.

“Basically we touch the 8-Zone at the end of year 4 (in the current mine plan) and the first real production from it comes in year 5,” says Labrenz, noting the top of the zone is at about 800 metres depth. “With some of the engineering work we’re doing onsite right now and the productivity improvements, we think we can reach it as early as year 3 – so it’s a very material change from the feasibility mine plan.”

With development progressing nicely, Pure Gold is poised to enjoy the spotlight both for its new producer status later this year, and for its exploration results as it expands the project’s scope.

“We’re coming into the strongest Canadian gold price we’ve ever seen, so our timing couldn’t be better from that perspective,” Labrenz says.

With gold trading at US$1,850 per oz. at press time, we’ve compiled a list of a few other advanced gold projects we’re watching with near-term development potential.

Construction at the US$1.3-billion open pit project will begin in the third quarter, and continue for 32 months, with commercial production expected in the second half of 2023.

The economics of the low-grade project, with probable reserves totalling 233 million tonnes grading 0.96 g/t gold for 7.3 million oz., will benefit from the current high gold price environment. At US$1,700 gold, the project’s NPV is US$2 billion, the IRR is 22.4% and the payback period 2.6 years.

With project operator Iamgold looking into the use of autonomous trucks at Côté, this would be the first such use at a mining operation in Canada outside of the oilsands.

Marathon Gold released a prefeasibility study for its Valentine gold project, about 80 km southwest of Buchans, Nfld., in April. The study outlined an open pit operation with a mine life of 12 years that would produce an average of 175,000 oz. gold annually for its first nine years. All-in sustaining costs were projected at US$739 per oz. of gold.

Marathon plans to submit an environmental impact statement later this year, with a feasibility study expected in the first half of 2021, and a potential production start in late 2023.

The Marathon and Leprechaun deposits at Valentine contain proven and probable reserves of 41.1 million tonnes grading 1.41 g/t gold for a total of 1.9 million oz. gold.

The study looks at restarting the mill at Premier, a past-producing site, located 25 km away from Stewart. Mill feed would come from underground production at three deposits at Premier and one at Red Mountain, 23 km southeast.

Sabina Gold & Silver released a feasibility study for its Back River project, in Nunavut, in 2015. The study outlined a 200,000 oz. per year open pit and underground project with a 12-year mine life and an initial capex of $415 million.

The project won the approval of the Nunavut Impact Review Board in 2017, and Sabina recently received the last major permits needed to operate the mine. Major permits for construction are already in place.

In June, Sabina raised $55 million for exploration at the project.

This year’s program at Back River, located 520 km northeast of Yellowknife, will consist of 8,500 metres of drilling targeting high-grade mineralization at the Umwelt deposit, infill and expansion drilling at the Llama deposit, and the testing of several new targets.

In May, Wesdome Gold Mines released a preliminary economic assessment for its past-producing Kiena mine near Val-d’Or, Que., that projects an initial capex of $35 million, a mine life of eight years, and annual production of 85,931 oz. gold. All-in sustaining costs were estimated at US$512 per oz., with an after-tax NPV of $416 million and an IRR of 102%.

The company is now working on a prefeasibility study for Kiena and looking to make a production decision early next year.

The project, which was put on care and maintenance in 2013, already contains a 2,000 t/d mill, and other infrastructure.

Exploration drilling this year will focus on up-plunge potential of the high-grade Kiena Deep A Zone.